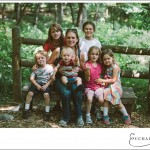 When Blinders are Removed

Six years ago. It was 2014. I felt so alone. We had just moved to Nashville a year earlier. It wasn’t just the move though. It was that before we moved it was like the enemy had his bow aimed at my heart. Arrow after arrow would come screaming and piercing. First there was the friend who told me “I really don’t care about you.” Then 5 months later there was the history bomb that dropped about my existence. My friend may not have cared about me but God did! Thankfully I found out that my life was saved from abortion.

I would say that I was living my life in a little box. I could look out and watch everybody else living a joy filled life. And I could encourage them and applaud them, but I was stuck in my little box. Alone. Raising 6 kids.

So you know, I was not alone. My husband worked dutifully. But I felt alone. Never clinically diagnosed, but I would say I was depressed and filled to the brim with anxiety.

My faith was incredibly strong. Or at least it was growing. Being alone can sometimes be a good thing. I was hesitant to make friends. So I didn’t. But I had God! I could lean into Him and be comforted by the only One who can comfort.

So I was the mother of six children and felt completely deserted. At the time I 100% believed it was my fault. That my faith must be lacking. We even began seeing a christian marriage counselor. Because, remember, in my head it was my fault. My weak faith was causing our marriage struggles. My children were eleven and younger. How my attitude must have crushed them brings me weeping to my knees. Those six kids (we have eight now) are 7-18 years old now and faith filled to overflowing, but I know that my attitude must have left some sort of mark on them.

One thing that we would do was we would return to Charlotte, NC every once in a while. That would fill my heart each time. I had friends there! Especially my new pro-life faith filled friends. We would gather, have dinner, and chat forever. I’ll never forget when a friend and I sat on her back porch making fun of those other people in Nashville. These were possible friends, yet they posted far more about their businesses than they did about sidewalk ministry. And sidewalk ministry was my newest passion! Every single Saturday we would head out to Welshwood in Nashville and proclaim the gospel and pray that God would use these broken vessels to save innocent lives.

Another thing that helped me get through was I focused on paying off our debt. There’s something about having a goal that is really good at keeping me distracted. So I had a great time focusing on our debt snowball.

A year later I was on Instagram and noticed a fellow sidewalk counselor from California was posting. She was in the same business as the Nashville sidewalk counselors. I actually had the opportunity to meet her when she was driving through on an RV trip. However, I had no desire to make friends and I was weary. I skipped out. Plus it was our wedding anniversary so it was a perfect excuse to stay home.

As the days went on so did I. Always wondering why the cloud of abandonment and loneliness followed me around constantly. I’d get brief moments of happiness. I look back on my pictures and wonder how was I so happy in the photos, but inside I was sinking down, down, down.

March of 2015 that California girl was posting about how she was expecting baby number seven. At that same time I had a doctors appointment and I asked if I could still have another baby. She looked me dead in the eyes and said “with your anxiety??”

I had never said anything to her about what I was struggling with simply because she was not the kind of “doctor” that would have any knowledge on anxiety. So yeah, I left determined to prove her wrong. My new friend in California looked so sincerely happy and full of life. I wanted that. On April 1st she posted about the supplements she was taking. Without even speaking to her I followed a link and ordered. I told no one except my husband because I had spent all of this time making fun of the sellers of this product. My friend in Charlotte, I certainly was not going to tell her. So I kept it to myself. The day the test came back positive for baby number seven was the day the package of Plexus Slim arrived on my doorstep. I had no desire to lose weight, obviously. I just wanted my joy back. Maybe, just maybe it wasn’t a lack of faith. Somehow, though we were heavy into paying off debt, I found just enough to purchase this one product.

A couple weeks later I noticed I wasn’t sad or discouraged anymore. I had a smile on my face again and not just for photos. I still didn’t tell anybody, though, because what if. What if people thought I was just trying to sell them something again? So I stayed silent.

About three months later I finally posted on social media because why not. I had been a part of multiple direct sales companies and my only customers ever were my grandmother and my mother in law. So yeah, wasn’t expecting anybody to be interested. At that exact same time I am proud to say that our debt had been completely paid off! Maybe it was that happiness that caused me to share. All I know is that seven friends joined with me that week. They, too, were looking for some help. I knew this helped me, but I certainly couldn’t explain why.

One of the biggest lessons I learned was that when we struggle it could be one of three things. It’s either body, mind, or it’s spiritual. It could be multiple. For me, I thought for sure it was my spirit, had no idea it was my body. I also wasn’t expecting something so simple to affect so much. Because my body was hurting it was damaging my mind/thought life. And I have no doubt the enemy saw a terrain ripe for play.

One year after I posted on social media for the first time I realized how the Lord was using me in this business that I had spent so much time demeaning. My Plexus team now has thousands of ambassadors/customers. The Lord has blessed us with an income I never could have imagined. All because He saved a broken girl from the valley. I felt tugged, I listened to the Spirit and thought “what if?”

I also became a Natural Health Professional and I’m currently finishing up my ND program (doctor of naturopathy). I have had clients that I have assessed recently and was able to say that they 100% needed the Plexus products and I was able to guide them to which ones they needed. What a crazy unexpected blessing! He changed my life and now He is willingly using me to help change others. This is so incredibly humbling when I spent so long feeling like a nobody. I am now the mother of EIGHT beautiful blessings! I was never a nobody ❤️

With all of that being said, I want to put this offer out to you. Plexus has a superb offer right now where you can sign up for ONE PENNY. In my debt pay off days…what I would’ve given for a deal like that. I could’ve tried other products that I needed. However, this offer ends November 30th at midnight EST. I feel like the godmother warning Cinderella of the impending time. If you have any questions I would be honored to help you. If you live local to me talk to me about a health assessment. If the Lord is allowing me to serve Him in this way to help His children to tend to their temples then Lord, here I am, use me.

As always, no matter what you may be struggling with feel free to message me and let me know if you’re in need of prayer. Let’s be the body and serve one another.