Removing the Heavy Chains of Debt

The rich rules over the poor, and the borrower is the slave of the lender.

When you first sign up for a credit card that first dollar you put on it makes you a slave to the lender. For 20 years this credit card has been heavy. For 15 years I’ve taken on this heaviness as well. When you say “I do” you say yes to it all. The enjoyable and the difficult.

I want to encourage you as the Lord has provided for us in ways that we could only have dreamed of. But I also want to walk alongside you and let you know the difficulty in walking this road. You’re not alone. There were so many times I felt singled out. We were house poor. After an inheritance we were able to buy a house. We bought a nice big house. But we still had credit card debt. And many more debts other than that. So painting a room? Putting our children into dance class or swim lessons? It was a dream. My husband, at one point, was working seven jobs at one time just to pay the bills. There was no excess. We would have people tell us how rich we were. What they didn’t know and what hurt so deeply was how they were judging us on our foolish decisions. I didn’t divulge our money troubles to many people because my husband still made a lot. But it wasn’t enough. He worked and worked and worked. I’m praising God for giving him such an admirable work ethic. One that is missing in todays culture. I almost felt like I had to tell me husband to back off on earning so much because it was making my friends feel awkward.

There was even a time when I felt that people were judging us because a ‘good’ Christian wouldn’t make so much money. That it was better to be poor than to work hard and earn money. As I said, what people didn’t know was that once the money hit our account it was immediately sent out to our “owners.” And our desire wasn’t and hasn’t been to be filthy rich. But to give. To give without wondering if that check we gave them will deposit or not. To save up for a future adoption.

Not too long ago we were six digits in debt.

My husband and I are matched up perfectly. He has the work ethic to earn the money and I have the stinginess of Miss Hannigan. No dollar aisle shopping if I’m around! With that attitude, it was challenging at times. My husband has the gift of giving. He loves to bless others. And that was hard for me. I just wanted debt gone. However, recently he wanted to bless a large family we are friends with by taking them on vacation with us. Because he had been teaching me how to give {it really is something I needed to be taught} I was able to witness and be a part of something that changed my life forever. My heart grew three sizes that week.

I, also, have had the blessing of teaching him how to spend wisely. The night I went grocery shopping and had to leave the buggy full and my arms empty was the moment the Lord opened his eyes to our financial troubles.

The tears fell often. The anxiety had its highs. We doubted that it would ever get paid off. And then God…

Within just the past few months God has been wiping our slate clean. First it was a school loan. Then it was our maxi van. And just this past week it was the heaviest weight. The chains that had tied us down our entire marriage. Our credit card.

And now we are looking to new horizons. Looking to making real the dreams we’ve had for years.

By the way, we take no credit for the paying off of the debt. This was all God. And it was HIS money we were mishandling in the beginning. Thankfully our eyes were made right and we realized that the work came from God. The paychecks came from God. The forgiveness and wisdom came from God.

As I’m sitting here typing, three days after our credit card debt has been erased, I’m still crying tears of joy. It’s almost unbelievable. To not have that weight around our necks.

With that being said, we still do have one debt left. And we are attacking it. School loans, I tell ya. Not understanding the logic in going into debt to make more money but the loan is still too difficult to pay off? But through God’s grace… 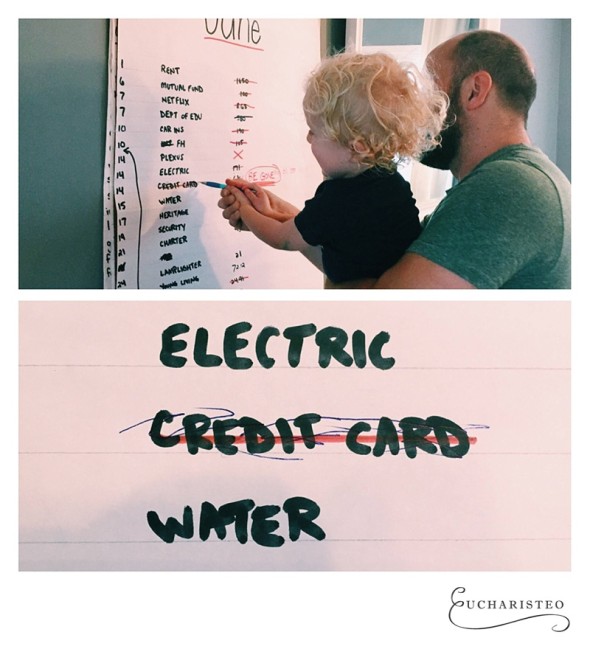 And most of all, the lessons we are able to teach our children through our struggles, and now, our successes. A roller coaster you guys. The shame of not being able to bless others, including our children, because of debt. Neither of us were taught the truths of debt. For me, I remember walking through Ohio State campus and being bombarded by credit card offerings. I liked the free shirt so I would sign up and never use the card. By the way, I wasn’t a Christian, just so we’re clear. I was also told that I “needed” credit card debt to buy a house. Let me tell you this now, if you have 20% down on a house you don’t need credit card debt. Teach your children now! Don’t wait to tell them “ah, yes, I did the same thing. It’s what happens.” Teach them how to manage God’s money so that their mistakes don’t crush them later.

As of now, paying off the card has been a HUGE blessing but that won’t change how we spend money. No more credit cards ever again. Plus, we’re saving up to buy a house with land {Lord willing}. A dream we’ve had for eight plus years. To be in the positive is a brand new experience for us.

Thank you for allowing me to share this very private part of our lives with you. I know there are many struggling with the heaviness and shame of credit card debt. Stay focused my loves and have hope. Make the sacrifice now to end the suffering sooner. It’s a tough road and not one that you share openly with everybody you come into contact with. You can do this. Pray and seek His guidance. I never would have thought blessing others while in debt would be part of our debt free journey. I’m still learning.

Tomorrow I’m going to do something I’ve never one. I’m sharing videos and photos with you of our debt pay-off day! It was too fun to keep to ourselves!